Ten years ago I climbed the Eiffel Tower. Today our front steps seem daunting. I had foot surgery last week.

When I woke up they gave me a walker, told me to skedaddle and admonished, "Don't put weight on that thing for two weeks!" 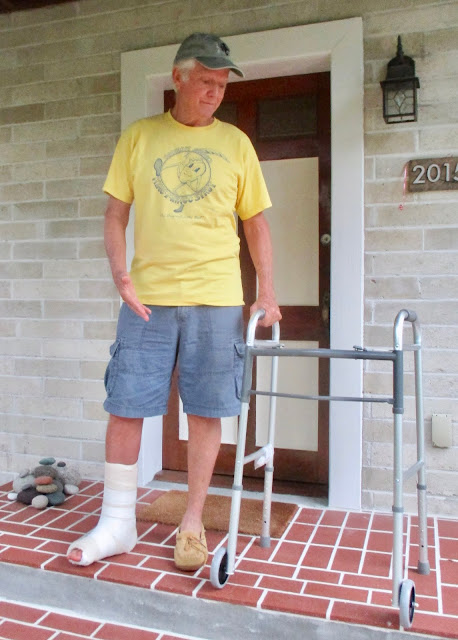 Death scares he hell out of us and so do events leading up to it. Like needing a walker to get around. Joking about the reaper (and walkers) eases the inevitable. 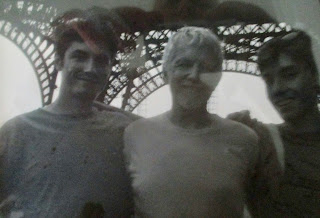 Once they were a source of dark humor.  I'd see them in Coconut Grove trash piles and wonder how they got there. When I brought one home in 1986 my wife complained.

I suggested, "Let's keep it for a week". Her ballet teacher, Tony, was turning forty which seemed old at the time. What better way to add laughter to his  party than giving him a ribbon-festooned 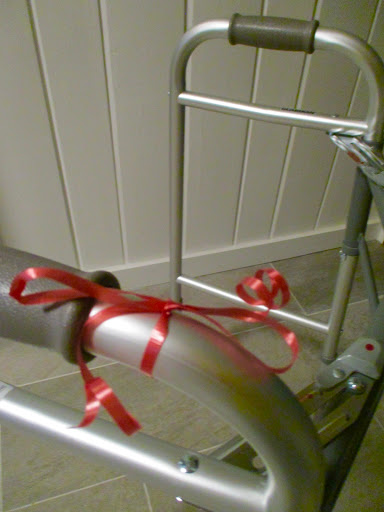 It was a fun-filled gathering. If he was embarrassed Tony didn't show it. The nimble Italian  begged it for a dance which ended with a handstand (note: don't try that at home or anywhere else).

After the applause subsided he never touched it again. He left his gag gift with us.

I folded the frame and set it aside until the next 40th birthday. We laughed at the inevitable once more. When the last of our friends hit the big 4-0 we gave Alice to Goodwill.

We had no use for it. We'd never need it and old jokes at 50 aren't funny.  It is old, retirement is on the horizon and Metamucil's in the medicine cabinet.

This morning Francesca and and I were discussing the odd metal frame next to the bed and the birthday joke from the 80's. She pointed out, "Maybe you should have kept it around. When people turn 60 or 70 the tide turns again. You might hear, "Thanks.  I'll be needing this soon!".

Mine?  It's taking me to dinner tonight, forty-feet away.

Posted by Glenn Terry at 8:26 AM No comments:

WHATTA YA DO WITH THOSE CAMPAIGN SIGNS?

Isn't it incredible how plastic signs pop up before every election?  Do the candidates with the most win?

Even more amazing is how they fill up our land-fills afterwards, zillions of them, probably enough to cover the moon a thousand times.

These days I recycle them for the campaigns that follow. Here are two recent examples, 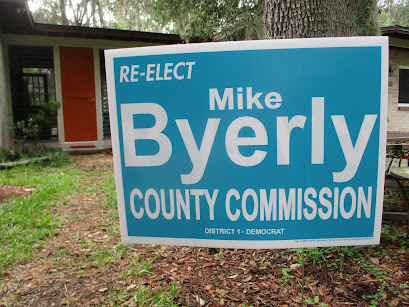 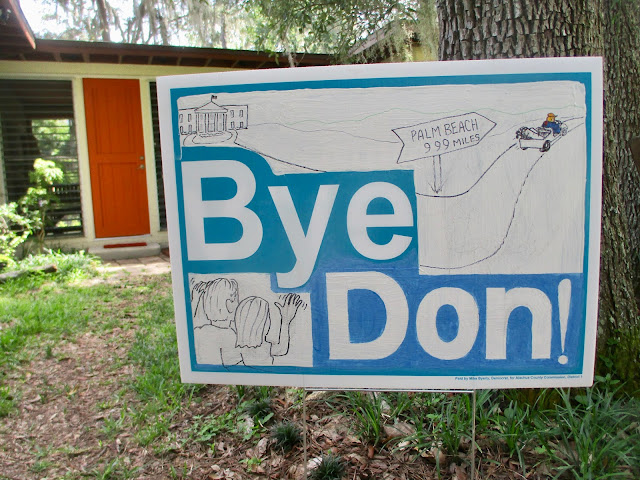 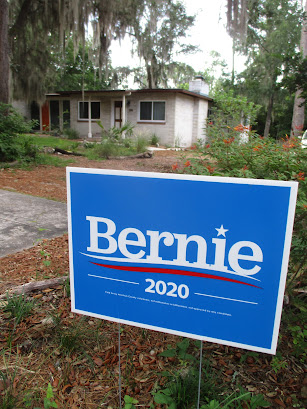 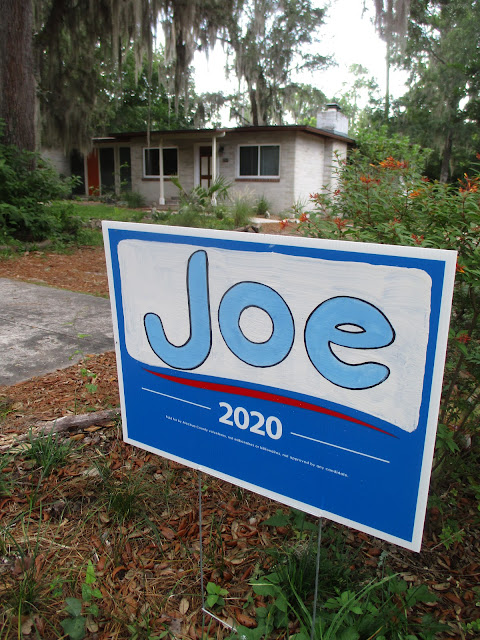 Get some paint.  Maybe we can start a trend.

Posted by Glenn Terry at 4:28 AM No comments:

"WHEN YOU READ THIS I'LL BE GONE" 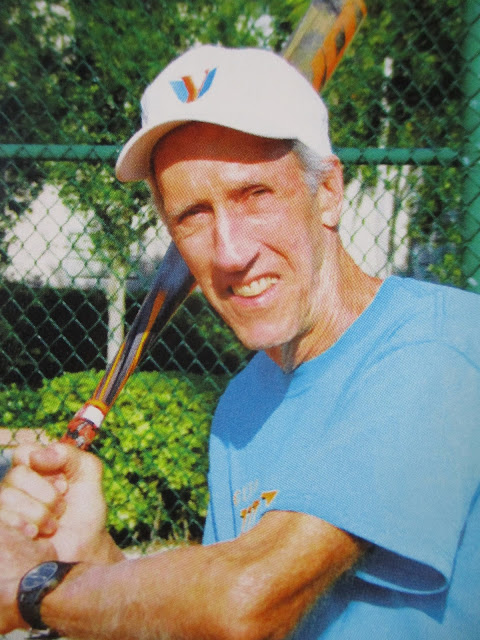 This week I received a short note from a suffering softball buddy, Roy Schwab.  He let me know he was ready to go.

Roy and I played on old-guys  teams in Miami and more recently, Gainesville. The West Miami native was always our best athlete.  Roy was fast as a gazelle, even at 75.  He once hit three homers in one game. Both humble and helpful, he never hesitated to give me much-needed playing tips.

The former college professor was loving his North Florida retirement. Last summer he moved up from Miami into the new house he helped design. Built on five-acres, it abounded with trees, fresh air, and stars above.  His two daughters came to visit along with his first grandchild, Elijah. Life was good. So were holidays, before the pain began.

Six months ago he learned he had a deadly form of cancer. A week later the Coronavirus quarantine kept us from visiting him. Last month, knowing the end was near, he was able to fly to California to be with his kids. A few days ago his team mates got an email,

I wanted to thank you and all the softballers for a wonderful experience with many fun times. Please remove me from your mailing lists. Today will be my last day on Planet Earth. I’m in California now where death with dignity is law. Take care, Roy.

It was a honor to be his friend.  I'm glad his suffering is over and he left on his own terms.  I hope somehow, some way, Roy and I can play catch again. 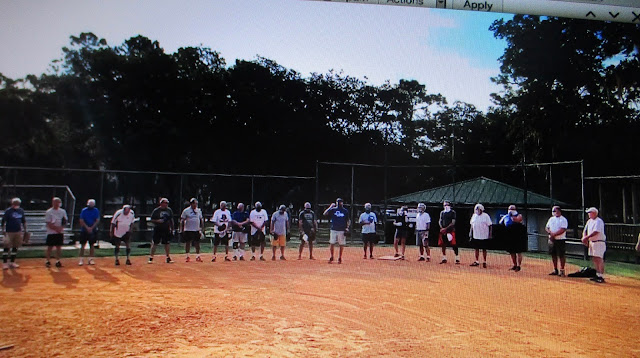 Before yesterday's game we honored our departed team mate.

A similar thing happened years ago. 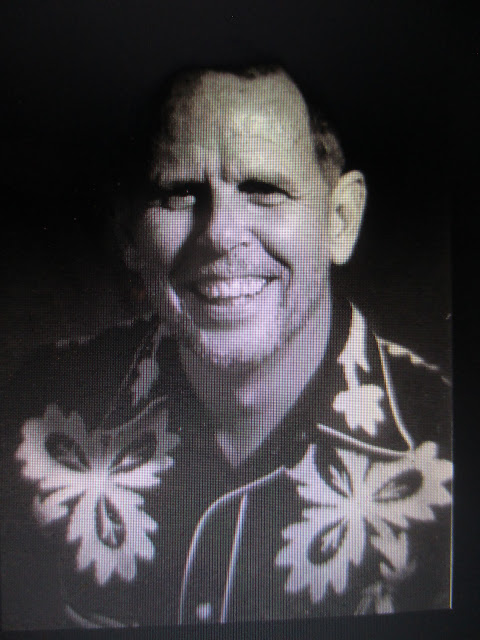 I met Bob Burns on the set of a cheap horror movie, "Demonoid", in 1980. While I was a gofer, he was was the film's art director, best known for his work on "Texas Chainsaw Massacre".  Bob also directed films and acted a bit. 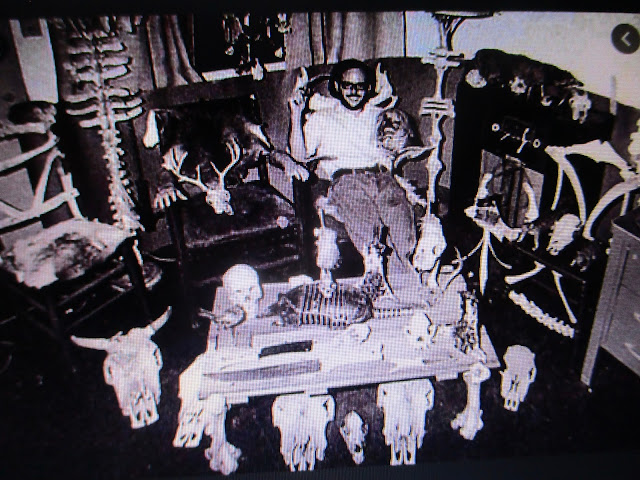 In the early 80's his Santa Monica apartment was decorated from the props he created for the well-known slasher film. It was both creepy and cool. 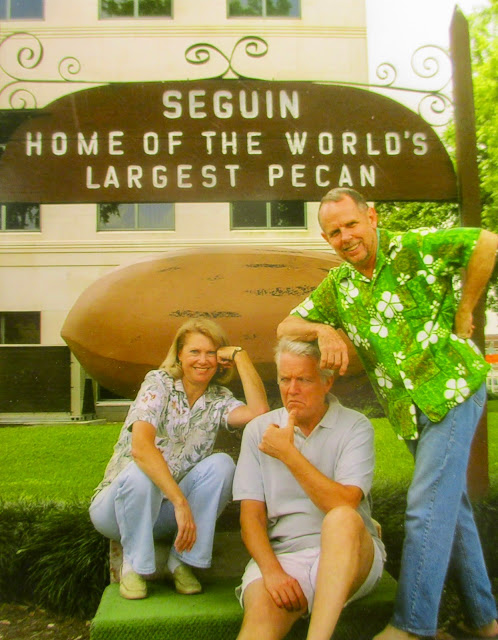 Years later (2004) I visited my semi-retired friend at his home in Seguin, Texas. This time, only a part of his house was a horror show. Much of it then was taken up by an impressive rock collection.

On my 2004 visit, with Bob, a neighbor, and the world's largest pecan.

Bob demonstrated how he played spoons in a local band,"like a sonofabitch", he bragged. He seemed healthy enough but a few months later I got a  note from him saying,

"Thanks for being a friend....I'm with Elvis now". 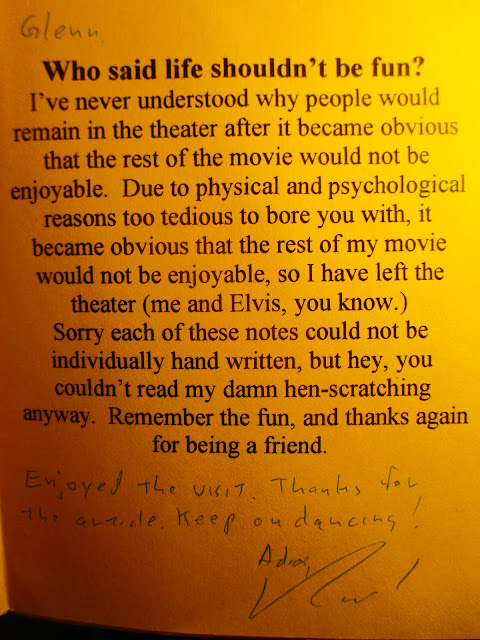 Apparently after learning he had  terminal cancer, he went online to learn about a painless way to end his life.

He mailed these notes to friends the day before died.
Bob, the occasional actor, played his final scene flawlessly.

Posted by Glenn Terry at 8:44 AM No comments:

EVERYONE NEEDS A FAUCI BOX

The deadly virus is keeping us at home, often wishing we were somewhere else. Two of these wishful thinkers escaped from South Florida this week. Gray Read and her husband, Phil, stopped by for a
socially-distant visit. It wasn't to difficult as they carried their fabulous "Fauci Box" with them. 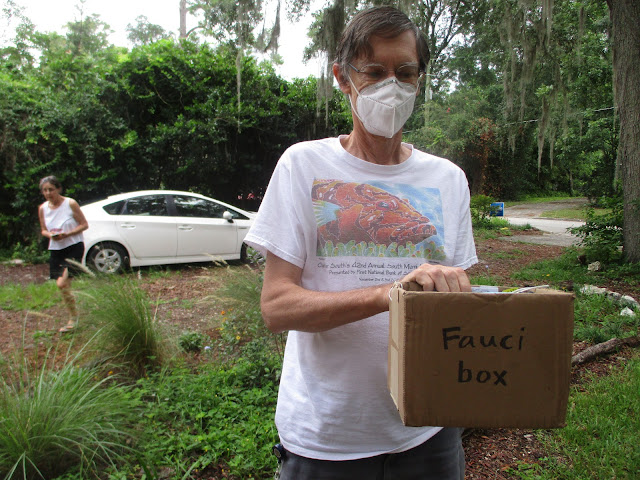 Photos can be deceiving. Gray actually has two legs, a big help in keeping ahead of the Coronavirus.


Asking, "What would a long-distanced driving Dr. Fauci do?", they are traveling with a food-filled ice chest and their own invention, a "Fauci Box". 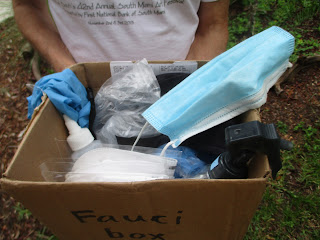 It contains nearly everything you need to stay free of the C-19, the plague that killed 256 Floridians today (Thanks Governor Desantis. We know it could have been worse). 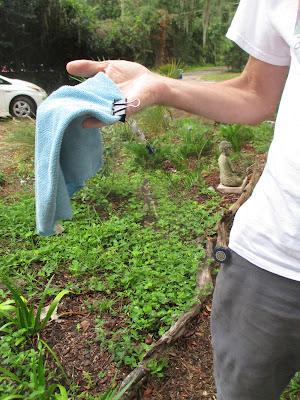 On his belt Phil wore another clever creation, a retractable rag for opening doors. The blue fabric holstered on his mid-section could be a new Corona fashion trend.

WHERE'S WALDO AND THE GREEN HIPPOPOTUMUS? 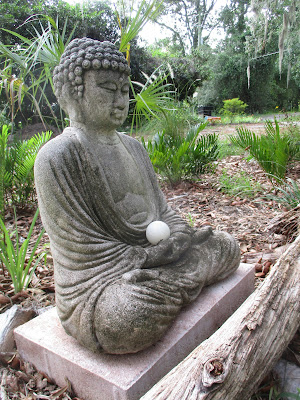 Who thought we'd be staring at the walls this long?  If you're batty as Francesca and me, its time to take a walk.  The fresh air, exercise, and Yard Game #5 will do you good.
As is our habit, we have strewn a collection of "why are we hanging on to this?"
stuff in our front yard. 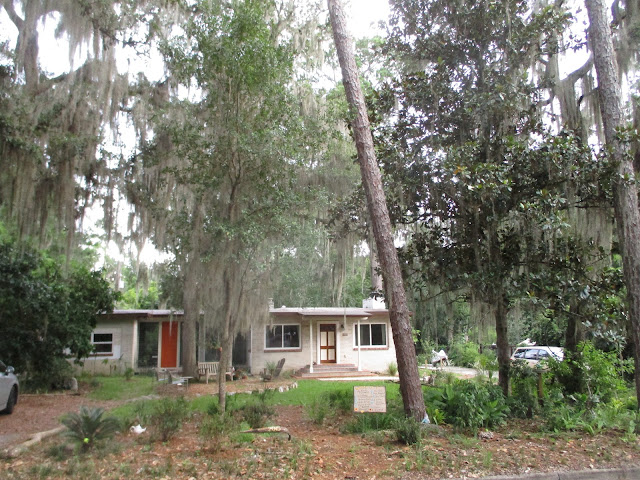 If you look very closely you can probably find them all! 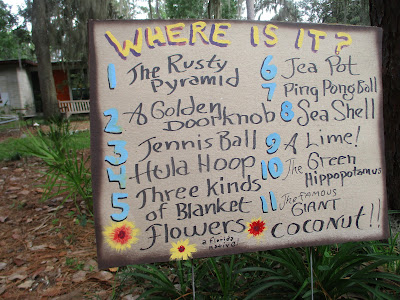 There's a sign to tell you our  battered gnomes aren't on the list (but one of them is next to
to the teapot my wife made 50 year ago (no, we can't get rid of that unless you promise to give it a good home). 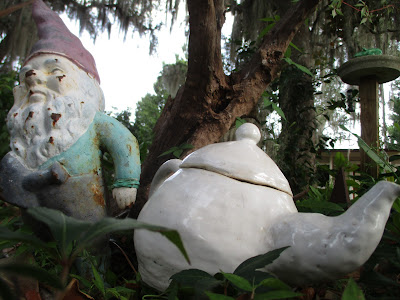 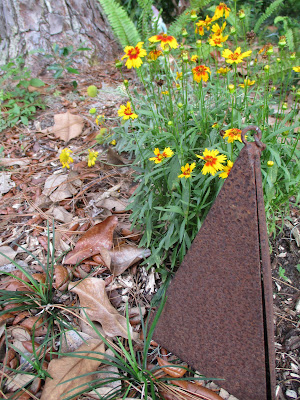 You've seen everything  on Netflix so come over, after six, when the temperature starts sinking below ninety. We'll be happy to see you. 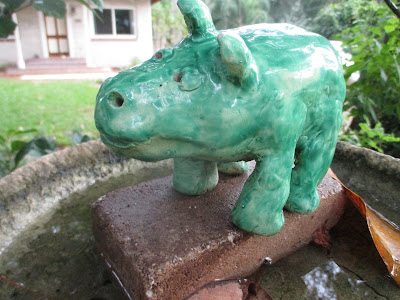 From a distance, of course.

SNOOPING FROM THE SKY

There is something that doesn't love a drone. It's everyone but the person flying it.
I got my first taste at a Miami dinner party years ago.  Looking up at an irritating noise I saw a small, blinking, aircraft. It hovered 'neath the trees looking down at us. By the time I found a rock  the drone had fled. 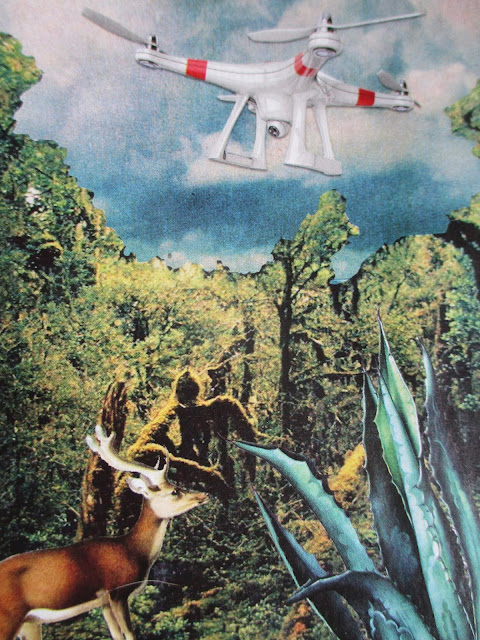 I understand the thrill one has virtually zooming  over treetops. The problem is you are often invading someone's private space. A bigger problem is figuring out how to knock them out of the sky. When I hear a drone destruction story it makes my heart glad.

Last fall, my son and I drove over to St. Augustine for lunch. Afterwards Ian and I visited the Spanish fort that's guarded the harbor since 1656.  We chatted with a volunteer, a man who loves masquerading as an ancient soldier a sword on his hip. 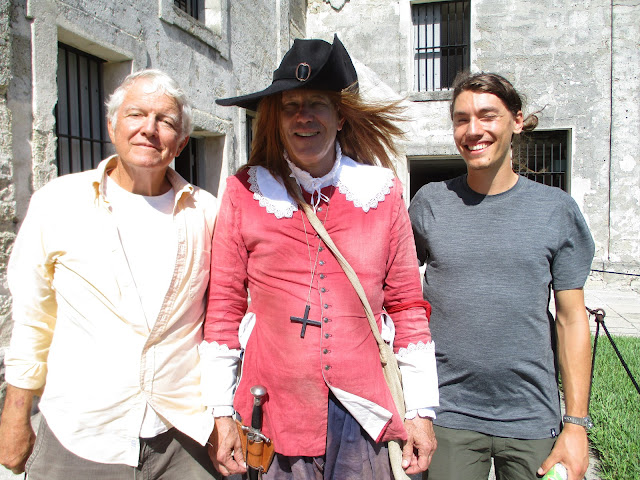 Six months later we had neighbors over for dinner and the subject turned to the irksome, robotic mosquitoes. A friend of theirs spends his winters "guarding the fort" in a colorful pink coat.
One afternoon he noticed a drone buzzing overhead. The damn thing wasn't satisfied with
a top shot of the fort and the tourists inside. The offending insect plunged down to eye-level in the central courtyard, just eight-feet from the guard.
It was easy for him draw his sword. He had a duty -pretend or not- to protect the fort and everyone in it. Lunging at it caused the tiny spinning propellers to hit hardened steel.  An explosion of plastic fell to the ground to applause from surrounding tourists.
I would have cheered too and given the man a medal.
A moment later the drone's angry operator was in the guard's face demanding compensation.  After a few minutes of abuse the fort's manager stepped in. In uniform with a real gun on his hip, he ordered Drone Man to clean his mess and pay a $250 fine.
A sign clearly states as you enter Castillo de San Marcos, "No drones allowed".
__________________________

Posted by Glenn Terry at 6:48 AM No comments:

LOSING A FRIEND TO COVID-19

Two months ago I was listening to a public official tell us,"Coved-19 is coming and it's going to be bad. You'll probably lose someone you know.

That happened to me today when I learned of the death of Bobby Pin. My Burning Man buddy was one of the most charming, out-going people you could ever meet. Bobby made documentaries,
took beautiful photographs, and helped run film festivals all over the world.

Just a month ago he posted a FB picture of himself smiling from an ocean-side hammock
captioned, "Day 4, Quarantined in Hawaii. Stay safe".  I imagined how wonderful it would to surf and eat mangos until the pandemic passed.
He got the virus soon after and died last night in the Maui General Hospital.
His family, Burning Man friends, and partner, Dan Greening, did their best to share their love  and help him pull though.

The world traveler took his last trip to an intensive care unit. How incredibly sad to think that someone who had so many admiring friends had to die -more or less- alone. Bobby was just a smiling sixteen year-old who happened to turn fifty last January.  Heaven's a better place with him there.
Posted by Glenn Terry at 8:09 AM No comments: